Like so many staples of western occultism, alchemy has its origins in the multicultural world of Hellenized Egypt around the first century. Of course, this is only as far back as we can trace it based on written evidence. Humans had been working with metal and chemicals for thousands of years prior, creating alloys and manufacturing artificially created compounds. Despite not understanding the scientific functions that produced the results, ancient and premodern artisans were adept at this early metallurgy and chemistry. Not only were they interested in the functional aspects of the craft, but as early as 300 AD the writings of Zosimos of Panopolis describe and underlying theoretical framework with which these early “alchemists” hoped to manipulate physical materials.

While the terminology and theories described by Zosimos, such as dividing the nature of metals into a “spirit” and “body”, would characterize them as “magical” or “occult” to modern readers, alchemy at this point in history was much closer to chemistry than any metaphysical process. Zosimos is described by the historian of science Lawrence M. Principie as a “chrysopoeian“, meaning “one who makes gold”, and this more accurately reflects the goal of these early “alchemists”. Zosimos describes his work and experiments in a way that closely mirrors the core of the scientific method today; carefully thought out experiments, recording results, detailing all the materials including advanced equipment, and theories developed from direct observation. Since there was essentially no distinction between what people understood of the physical world and the divine, metaphysical forces were equally considered in the theories of how and why the results of the experiments appeared as they did. Before the Enlightenment, this convergence of science and the supernatural is well described as “natural philosophy”. Once western culture began to prioritize reason over religious authority in matters of the material world and humans’ place in it, previously conflated practices like alchemy and chemistry were more formally separated in discussion and practice. It is tempting to look to the past and apply such labels retroactively to authors and their intent. However, doing so is anachronistic and dulls the impact of the material. One could read early alchemical authors such as Zosimos as early chemists who should be praised for their advanced, scientific minds or as authors of allegorically veiled spiritual secrets. Both extreme views ignore elements of the contrary and are lesser for it. There is no reason that Zosimos can’t be respected for his scientific and spiritual endeavors in the context of when he lived. Alchemy, much like astrology, has at its core these two seemingly opposed components. The material nature of metals or the planets and their assigned metaphysical properties exist at opposite ends of a spectrum. Science is relegated to one far end (as it reasonably should be) but the esoteric view need not confine itself to the exact opposite. Later iterations of alchemy cast it in exclusively allegorical and spiritual realms, disparaging any connection to early practitioners who sought to craft gold from lead. Wise readers would do well to form their own conclusions about the nature of any work, practitioner and academic alike.

This next section will be a bit of divergence into a very generalized history for the purpose of context. If you’d like to skip it and continue on to just the topic of alchemy, you’re free to view or hide it as you wish:

With that in mind, the next important aspect of alchemy is its migration from Egypt and the surrounding Hellenic, Greek speaking world to that of the Arabic Middle East. In broadest strokes, while the Roman empire provided relative stability, its culture and influence dominated the western world. Wealth and stability produce greater advances in art, science, philosophy, etc. With the disintegration of the Roman empire into East and West, and the West’s eventual “fall” around 500 AD, the cultural center of the world effectively shifted to Constantinople (the East Roman or Byzantine empire) and areas of the near and middle east. Here we find the flourishing Islamic Golden Age, a period in history from roughly 750-1400 AD. Not only alchemy, but just about every conceivable human endeavor flourished due to the acquisition and translation of any and all available knowledge by various Caliphs. Again, this is characterizing hundreds of years of history and a complex culture in the very broadest of terms. Not every Emperor or Caliph in either empire prioritized knowledge and cultural development. Neither were the entire periods devoid of strife or destruction. These vast and powerful empires, however, generally were where people gathered and produced the most during their respective heights. This is why (western) occult history largely begins in Egypt, Greece, and Rome, then migrates to the Middle East, and eventually west again through Italy up through the European continent as these were the defining areas of power at the time. Much like the multicultural and metropolitan nature of ancient city centers like Alexandria in Egypt, the Middle East was a heaving hotspot of multiple influences. Where in the Roman Empire it was the Hellenic and north African cultures mixed with the more exotic near and far east of their time (areas such as modern day Turkey), the Middle East drew not only from all those cultures to its west but India and Asia as well. The Islamic Empire itself extended as far as Spain in one direction to parts of India in the other at one point. As ethnically diverse as it was cultural, Kurdish, Arabic, Turkish, and some Persian were the most common (especially in higher positions) but examples from just about every corner of the known world were likely present to some degree.
Show History Tangent
Hide History Section

So alchemy began in metallurgy and craftsmanship with the aim of transforming materials into silver and gold via processes that were the beginnings of modern chemistry. This knowledge has now migrated to the Islamic world where it develops further, both theoretically and practically, influenced by innumerable minds. Three things related to this period make it difficult to study: first is that the study of Islamic and Arabic manuscripts, authors, etc., has only really begun in earnest for a western audience in recent years, second is the propensity for authors to attribute their work to others (especially to the possibly fictitious Jabir ibn-Hayyan who ostensibly wrote over 3,000 books), and the appearance of the mysterious Emerald Tablet.

This first problem isn’t really a problem, more of an opportunity. With new translations, analyses, and commentary on Middle Eastern and Islamic work of this era becoming more prevalent in recent years, both critical academic and casual interest can flourish. As for the confusion caused by misattribution or intentional subterfuge, if not knowing all the answers bothers you then occult studies is going to continue to rub you the wrong way in general. The best we can do is continue to search, question, and discover. History will never give up all her secrets but the joy is in sussing out what answers we can. One of those secrets, which will likely never be fully revealed, is that of the Emerald Tablet, or the tabula smaragdina.

The farthest we can trace the Tablet’s origins is to roughly the eight century as part of an Arabic collection of works from a multitude or sources called the Book of the Secret of Creation. The text, despite its brevity, has played a large role in Hermetic thought and philosophy. It has also consistently frustrated alchemists since its appearance as they consider it a key to creating a “philosopher’s stone”, which had become one the primary aims of alchemy at this point.

The “philosopher’s stone” has gone by many names and has taken many forms, both physical and immaterial. In early incarnations, it was a powder that allowed for the transmutation of base metals into gold and/or silver. It was also thought to either be, or able to produce, the “elixir of life”. This latter substance could heal any wound and/or gift the user with immortality. While the earliest incarnations of alchemy were not unfamiliar with the inclusion of medicine, the development of a sharper focus on its ability to produce elixirs, cure-alls, and even unending life may have come from cultural exchange with Asia, especially modern China and India. These areas had their own conception of “alchemy” which also included transmutation of material into gold. The search for the “elixir of life”, however, was by and large the main goal of the practices in the east. Mercury played a large role, in both east and west, in the search for alchemical secrets as well as immortality. In an interesting confluence of practices and influence, the Arabic corpus of the aforementioned Jabir ibn-Hayam combined principles from Galenic medicine with alchemical theories of metals. 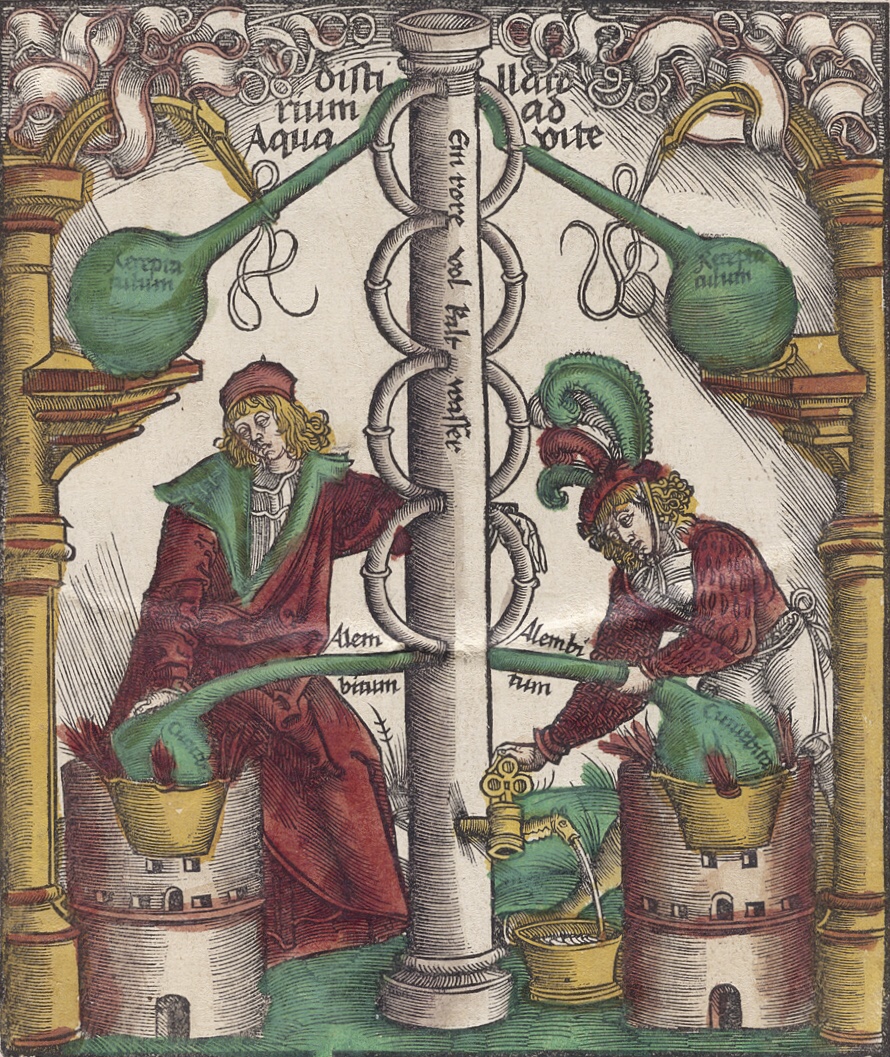 Digitized version from the Library of Congress’ collection of rare books

Digitized version from the Library of Congress’ collection of rare books

Principie, Lawrence M., The Secrets of Alchemy. The University of Chicago Press, 2013.

Built with WordPress | Protected by Akismet | Powered by CUNY