The entries on this page are arranged in chronological order. If you would like to see it organized differently or have suggestions, feel free to post on the forum or send me an email.

This list is by no means exhaustive but I’ve tried to include the most important practitioners, scholars, philosophers, and other figures for easy reference.

Plotinus (c. 204-270): Neoplatonic philosopher and author of The Enneads (compiled by his student Porphyry)

Pseudo-Dionysius (c. 5th-6th century): A pseudepigraphicWhen an author writes under the name of another figure (usually more well known) author of an influential series of texts that popularized Neoplatonic philosophy and integrated it with Christian theology.

Roger Bacon (c. 1219- c. 1292): Medieval English philosopher who is alternately considered a wizard or early proponent of the scientific method.

Nicolas Flamel (c. 1330 – 1418): Purported alchemist; his life and work were later highly fictionalized. He was a well documented, real person who lived in France in the 14th century. He worked as a scribe and owned a manuscript shop.

Marsilio Ficino (1433-1499): Italian philosopher and academic during the Renaissance. His translations of and commentary on  the works of Plato and the Corpus Hermeticum were hugely influential and proved to be a watershed point for Western philosophy and esotericism.

Johannes Trithemius (1462-1516): German cryptographer and occult author. His most well-known works, Steganographia and Polygraphia, are ostensibly books on cryptography and stenography that features several “occult alphabets” including the “witches’ alphabet”.

Giovani Pico della Mirandola (1463-1494): Known for his 900 Theses and Oration on the Dignity of Man, Pico was a controversial and eclectic philosopher of the Italian Renaissance. His propensity to collect and integrate disparate philosophies, as well as his interest in purportedly ancient knowledge, led him to found “Christian Cabala”, an amalgam of Jewish mysticism and Christian theology. He was poisoned and died at the age of 31.

Paracelsus (c. 1493-1541): Theophrastus von Hohenheim, more often known as “Paracelsus”, was a Swiss physician whose work revolutionized medicine in the Renaissance (previously the Galenic philosophy of medicine was the basis of diagnoses and treatments). His later influence on occultism stems from his philosophy as well as his purported alchemical work.

Johann Weyer (1515-1588): Dutch demonologist, student of Agrippa, he is best known for his book on demons titled De praestigiis daemonum. Weyer denounced the persecution of “witches” as he believed true demonic powers did not manifest as it was described by inquisitors. Instead, he proposed that those accused of witchcraft were suffering from delusions or other mental issues.

John Dee (1527-1609): Advisor to Elizabeth I, Dee was an alchemist, philosopher, mathematician, scholar, astrologer, diviner, and progenitor of Enochian magic in the 16th century.

Giordano Bruno (1548-1600): Italian Dominican friar branded as a heretic by the Catholic Inquisition. He was tried for heresy, found guilty, and burnt at the stake. He was the subject of Frances Yates’ influential book, Giordano Bruno and the Hermetic Tradition, in which the author argues for a Hermetic basis of Bruno’s thought and theories.

Robert Fludd (1574-1637): An English physician who had distinctive interest in the occult, the Rosicrucians, and Hermetic philosophy. He is known for the massive, two volume Utriusque cosmi which contains numerous illustrations on topics both scientific and metaphysical.

Jakob Böhme (1575-1624): German mystic and philosopher who is credited as the founder of Christian or Boehmian theosophy.

Emmanuel Swedenborg (1688-1772): Influential Swedish mystic; author of the book Heaven and Hell which details the afterlife as revealed to him by God.

Count of St Germain (c. 1691-1712 to 1784): A mysterious man who lived in Europe in the 1700s. Later accounts attested that he was immortal and he himself claimed to be hundreds of years old.

Éliphas Lévi (1810-1875): French occultist who became one of the foundational figures of the esoteric revival after the lull of interest during the Enlightenment and to the subsequent Spiritualist movement. His best known work is Dogme et Rituel de la Haute Magie along with his illustration of “BaphometThe being that the Knight's Templar were falsely accused of worshipping. Commonly misunderstood to be Satan or a devil.“.

Helena Petrovna Blavatsky (1831-1891): Russian occultist and co-founder of the “Theosophical Society” (not to be confused with Christian or Boehmian theosophy).

A. E. Waite (1857-1942): British occult scholar, author, and mystic. He is mostly known for his scholarly works, such as The Book of Ceremonial Magic, as well as his contribution to the hugely popular “Rider-Waite” tarot deck. Golden Dawn member Pamela Colman Smith provided the illustrations while Waite wrote the guidebook to accompany it (Rider refers to the playing card company who published the finished deck and guide).

Dion Fortune (1890-1946): British occultist, author, and practitioner of ceremonial magic. Along with Blavatsky, Fortune was one of the most influential female leaders during this era of Western esotericism.

Gershom Scholem (1897-1982): Preeminent scholar of Kabbalah. His personal library, including his notes, now resides in two specially dedicated reading rooms as its own collection at The National Library of Israel.

Frances Yates (1899-1981): English Renaissance historian. She wrote about the Hermetic and Neoplatonic influences on philosophy in the Renaissance. Her best known and most influential work was Giordano Bruno and the Hermetic Tradition,

Manly P. Hall (1901-1990): Canadian author and mystic. His book, The Secret Teachings of All Ages, takes a somewhat scholarly approach but with the dedication and convictions of a practitioner. 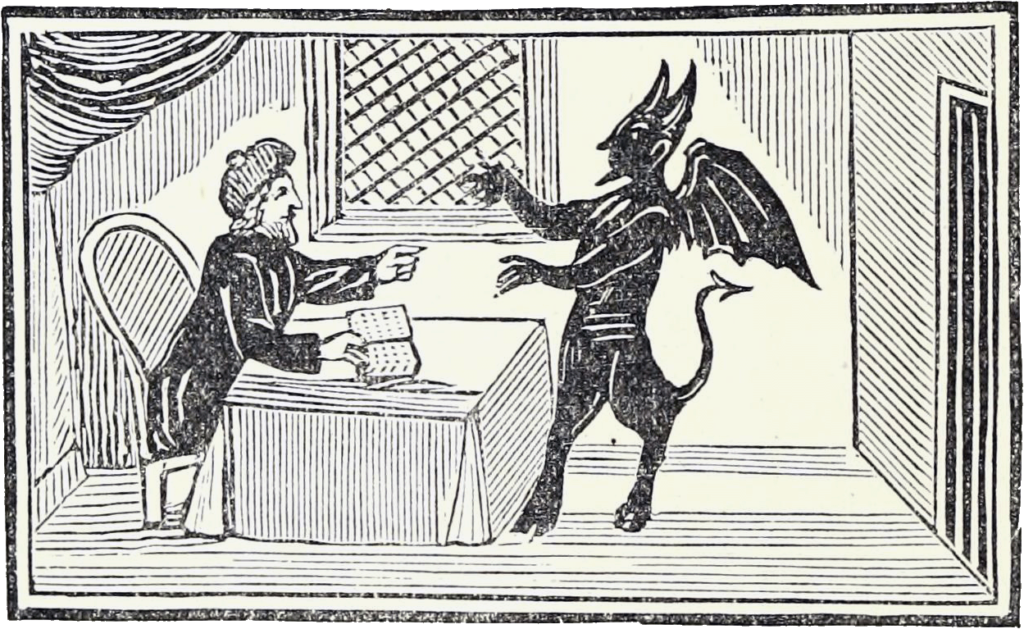 Doctor Faustus/Faust – A German scholar who sells his soul to the devil in a popular legend.

Solomon – Biblical King of Israel, son of King David, Solomon was considered a powerful mage and exorcist. The Key of Solomon is a popular magical text ascribed to him in which he describes how to summon and bind various demons.

Simon Magus – Sorcerer featured in the New Testament, namesake of the sin of simony.

Abramelin the Mage – Purported author of the influential Book of Abramelin.