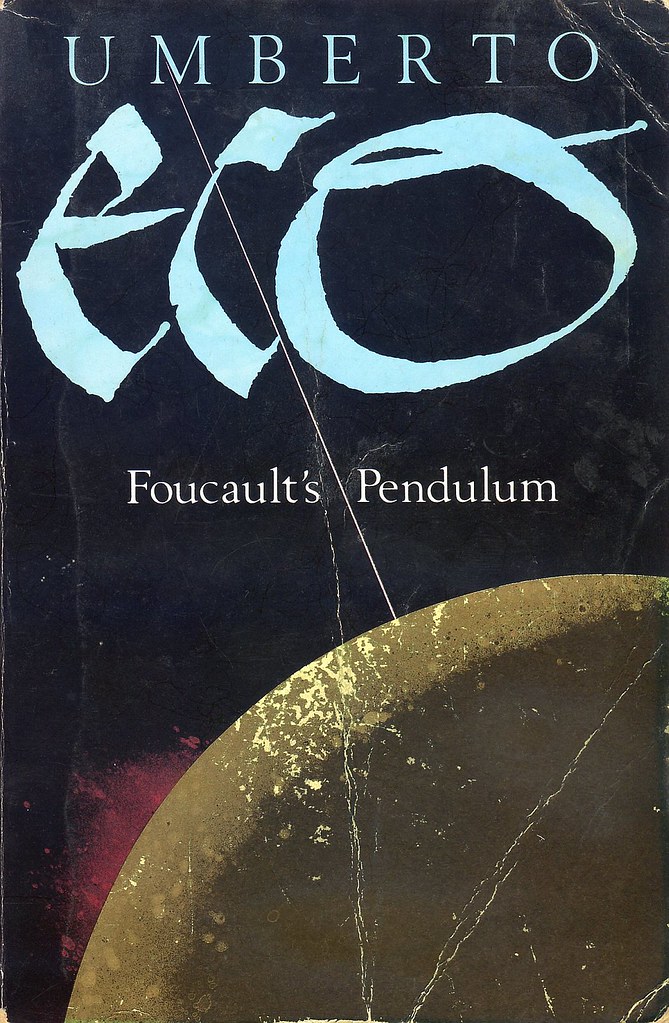 As far as I’m concerned, Umberto Eco’s Foucault’s Pendulum should be required reading for anyone seriously interested in the occult, esotericism, and related topics. While it contains a multitude of references and concepts central to the development of western occultism, more importantly it is a cautionary tale about allowing imagination to overtake reason.

The power and influence promised by occult studies has been a large part of its draw for millennia. After all, scientia est potentia  (“knowledge is power”), and the defining aspect of occultism is hidden knowledge. This, coupled with the inherent superiority an individual feels when they have more of anything (knowledge, power, money, beauty, status, etc.), attracts a certain kind of personality to occult study. Where these people fail to discover tangible and exploitable occult secrets, they are likely to invent them and hide behind a veil of spiritual superiority to prevent others from discovering their impotence. If this sounds like the standard practice of various cult leaders it’s because it is.

For the souls who are genuinely invested in finding ancient, life-affirming knowledge in esotericism, they may very well ignore any evidence that they are on the wrong path. The human mind is as persistent as it is malleable. It doesn’t take much effort to convince yourself of something that you wish to be true. This sort of delusion stemming from hope can be even more dangerous than the conscious deceiver. We see what we want to see and can violently reject anything or anyone that threatens that vision.

Both of these unfortunate paths should be avoided, not just for occult practitioners who have faith in their work, but for anyone on their life’s journey. The first is an example of impure intention. Doing anything just to gain power over others is reprehensible. The second is more difficult to avoid since hope should have a place in a person’s life. When hope turns to belief in spite of reality, however, therein lies the poison. Occultism often extends beyond a hobby or general interest and can play a role more like a religion. I don’t mean to stifle anyone’s faith or spirituality but at the same time I caution everyone to always keep a healthy perspective. It’s important to remember that the “power” promised by occult practices are more often a metaphorical or spiritual kind and not reflected in tangible reality. Both the cult leader and misled apostle either miss or ignore this fact.

Regardless, even if an occult text promises actual supernatural power I don’t think it’s controversial in this day and age to take its claim with more than a dose of skepticism. The primary message of most esoteric philosophies is to cultivate internal, spiritual growth which will be reflected in how you view your reality. While it may not be as exciting or flashy as levitation or turning sticks into serpents, the general consensus is that spiritual growth is a more attainable, realistic, and ultimately better goal.

How exactly this all plays into the plot of Foucault’s Pendulum I will let you readers discover for yourselves. Narratives invariably have a more profound way of imparting wisdom than a straightforward telling. It is as much the journey as the destination, after all.

Having nebulously prepared you for the ultimate moral of the story (without spoiling anything I hope), I’d also like to discuss some of the occult references made by Eco. I have to admit that even with my uncommon amount of background on these topics I was constantly reading about things that were new to me. As such, I can’t imagine that a casual reader could make it every five pages without reaching for a reference guide. I won’t be detailing all the information behind each reference, instead linking to appropriate pages on this site for more background. I also won’t be discussing any major plot elements so you’re free to read through the rest of this page spoiler free. So here are some of the more important, interesting, and obscure references explained in the context of occult studies (which I intend to expand in the future if you find the current content here lacking):

It’s not uncommon for authors to give their characters meaningful names. Unlike children, who are named before their personality and history emerge, characters are rarely undeveloped before they are named. The author typically has some idea of who this person is and chooses a name to match. The characters in Foucault’s Pendulum even chat and bicker about their names. The protagonist is asked by Belbo in their first meeting:

“Casaubon. Wasn’t he a character in Middlemarch?”

Casaubon, whose given name we never learn, replies that he doesn’t know but that it was also the name of a “Renaissance philologist” to whom he is unrelated. (Pendulum 54) This points to the historical figure Isaac Casaubon, who was indeed a 16th century philologist and scholar (incidentally the same occupation as the protagonist). What Isaac is most noted for in regards to esoteric and occult studies was that he deduced that the popular hermetic texts were not ancient as had been propagated for centuries. He found it highly suspect that such influential philosophies were not mentioned by the likes of Plato or any other ancient author. While not a direct parallel to Eco’s character, both Casaubons share the role of skeptical scholar.

Diotallevi’s name is more open to interpretation. It was a common Italian surname given to orphans, as mentioned by Belbo:

“Diotallevi is a good-luck name given to foundlings by city officials. Your grandfather was a foundling.”

Diotallevi adds, “A Jewish foundling”. (66) His insistence on his supposed Jewish heritage is a common argument, Belbo explains to Casaubon. Despite the lack of Judaic etymology, Diotallevi’s name does reflect his adherence to Jewish “cabala” in his name’s translation, “may God raise you”. As Belbo points out, however, there are Christian cabalists. Diotallevi’s interest specifically in Jewish cabala and his obsession with his supposed Jewish heritage may be a personality quirk or something involving deeper character development.

Belbo is the only member of the main cast whose name doesn’t produce any obvious references. As far as I am able to find, Jacopo Belbo’s name was a reference to both the river near where Eco lived when he was young and an author Eco greatly admired, Cesare Pavese. Pavese was born in the Italian village Santo Stefano Belbo. In fact, Eco changed the character’s first name from “Stefano” to “Jacopo” at the last minute to obscure the reference slightly, though devoted readers were apparently able to suss it out regardless. All this Eco admits in his Confessions of a Young Novelist (61-2).

Belbo’s computer, like Belbo, had a different name throughout Eco’s drafts and only received the name “Abulafia” in the final manuscript. (Confessions 61) I suspect, based on the conversation between Belbo and Diotallevi while setting up the machine, that Eco decided on the name so that Belbo could subtly poke fun at his friend’s pompous insistence on the superiority of his cabala. Diotallevi, convinced of the machine’s inadequacies, waxes philosophic on the methods of Abraham Abulafia to contemplate the letters of the name of G*d. Belbo immediately christens his new computer with the name “Abulafia” and runs a program to display all the variations of YHVH. Diotallevi remains unimpressed and Belbo remains obstinate, insisting on the machine’s usefulness. (Pendulum 28-30) The name Abulafia, born from a clever moment in character dialogue, continues to reinforce the themes of mysticism every time the computer appears in the novel.

Kabbalah and the Sephirot

Perhaps the most persistent and prominent of esoteric themes, aside from the protagonists study of the Templars, is Eco’s use of Kabbalah (generally spelled “cabala” in the novel) and the ten sephirot. The entire novel is divided into ten sections named after each of the sephirot, starting with the top of the tree of life, the “crown” sephirah, keter. I won’t go into a detailed analysis of each section and its related sephirah, other than to say that it is significant that Eco begins the novel with the divine keter and ends with the earthly malkhut. Generally, practitioners intend to work their way upwards toward divinity. Instead, Eco works his way down the tree of life until we reach the symbol for our physical reality on earth, separated as much as possible from the heights of divine intelligence. You can see in the diagram below how removed the two sephirot are. While I don’t consider Eco’s attitude toward the occult and esoteric to be dismissive or prejudiced (I can’t imagine anyone who genuinely disliked the topics to be able to devote so much time and energy into a project as involved and intricate as Foucault’s Pendulum) this structure suggests a “grounding” message. In spite of his interest in the occult, or perhaps exactly because of it, Umberto Eco’s overall message to his reader through this explicit structure is to “bring them back to earth”. 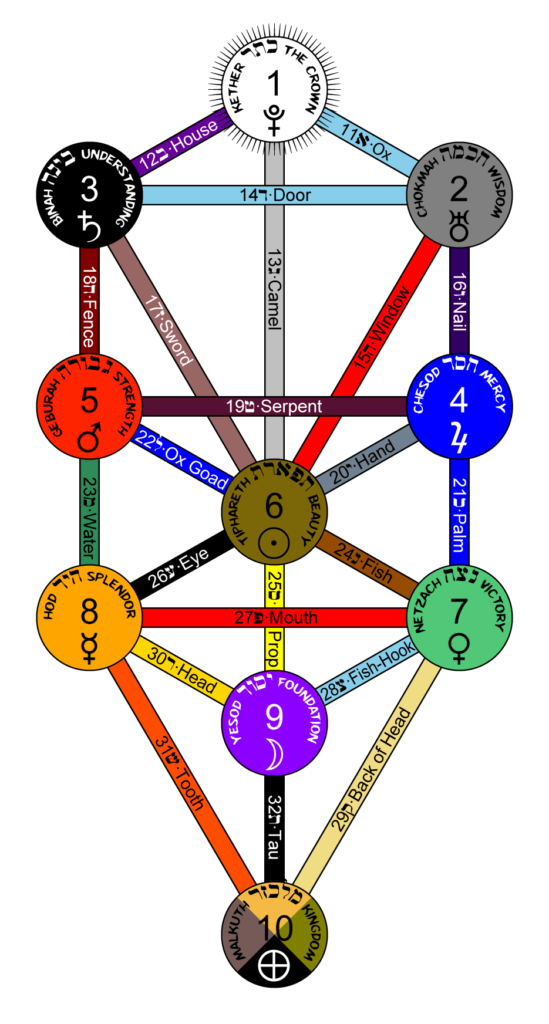 The Kabbalistic Tree of Life – This file is licensed under the Creative Commons Attribution-Share Alike 2.5 Generic license. Click here for source.

(There are many iterations of the Tree of Life. I chose this one, which is actually based on the tradition of the esoteric order The Golden Dawn, because it clearly labels each sephirah. This version isn’t necessarily following Kabbalistic tradition exactly, especially the associated colors, as far as I am aware. Regardless, it shows the general order and position of the sephirot as well as their Hebrew names so it serves that function here.)